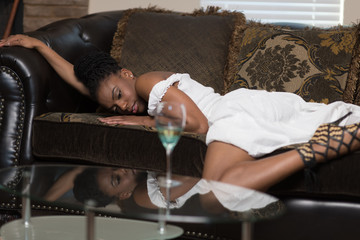 First published in my notebook  January 12, 2013, a later version of this story made it into the second Strange Stories book, Strange Worlds- Surreal Stories and Tainted Tales.

It was raining when I met my wife.  It was about two in the morning, the streets just starting to fill with belligerent drunks. She had been out with a friendbut the friend got lucky and left her to get home alone. She had run out of money but decided to walk home as she didn’t live far from the town centre. To this day she insists that she would have gotten home just fine if her stiletto heel hadn’t caught in a drain, breaking the heel and twisting her ankle quite badly.
I was tipsy myself, having left my mates because they were already
out drinking me, and settling down for a serious session of liver murdering. I had a headache and was just finding it all a bit much. I had hoped the cool air would clear my head.
I offered her help, maybe hoping if I’m honest that tonight would turn out to be a good night after all. As soon as I got close I realised she was far too far gone to know what she was doing. I couldn’t take advantage, but I couldn’t leave her there, easy prey for any passing predator. I could have put her in a taxi, I suppose, but it just didn’t feel right. She was so ridiculously beautiful, and so ridiculously drunk. It didn’t feel safe.
I gave her a piggy back instead, with her laughing and squealing all the way. She wasn’t sober enough to coherently tell me where she lived, but she had her driver’s license in her purse, perhaps optimistically hoping to be asked for ID, and the address on it was up to date.
I opened the door for her, realised she lived in an upstairs flat and carried her up. I laid her on the sofa and rummaged in her  orderly little kitchen until I found a glass of water and some frozen peas for her ankle. I looked for a bucket in case she was sick, but I couldn’t find one so I took the washing up bowl in instead.
She was fast asleep when I re-entered the living room, so I set the bowl on the floor next to her, and put the glass of water on the coffee table, in her line of sight. She’d need that in the morning.
She woke up a little bit when I tilted her head to the side, just in case.
“I got you some ice for your ankle.” I told her. “it will be cold though.”
She nodded her assent sleepily, eyes half closed, then let out an ear-splitting  squeal when I laid the bag of frozen peas on her ankle, then I was shushing her and she was shushing me and we were giggling like a pair of kids . There is a moment when the air goes semi solid, and I am suddenly very aware of her lips and I just know we are going to kiss. I know if we do, it won’t end there.
I didn’t want it to be like that. I knew even then that she was special.
“I have to go.” I told her.
“Now? “ She asked, and she looked so sad. “You don’t want to…stay?”
“Next time?” I ask her, “I’ll leave you my number?”
“Sure” she said, all sleepy again “I might even call ya” but
she winks at me and giggles again. I took her phone and had started programming my number into it when she said, “I think you are an angel”. I didn’t really know what to say, but I put Angel instead of my name into her phone, to act as a memory jogger.
“Talk soon?” I said, but she was asleep, so I left as quietly as I could.
Weird really, that she should call me an angel, when that night an angel appeared to me.
I know what you are thinking, but it really did. You might think I was dreaming, but I never dream, and anyway, dreams aren’t like that.
It was so bright I could barely see its features, I’ve no idea if it was male or female or something else, but it was beautiful like a forest fire, the most bizarre mixture of serenity and heart stopping terror.
The angel told me that she would call me, but that I must
not answer, for if the beautiful damsel I met earlier fell in love and settled down with me, she wouldn’t go on to fulfil her potential.
I scoffed at that, despite being fairly awestruck, and I told it that I would always support her, always encourage her.
It told me then that if she stayed single she would go on to discover cures for many different diseases, a whole new way of looking at genes and DNA, understanding of the human body. If she met me we would have the triplets followed closely by the twins, and be a nobody.
I have never seen an angel since.
You might think I made the wrong choice, but it doesn’t feel wrong. My wife loves the kids, loves being a mum. She might be a nobody, but she is a happy nobody.
I do feel the odd twinge of guilt when I see people dying from disease on the news, but our eldest daughter seems to have inherited her mother’s brains, I’m sure she will go on to do great things. I can’t look at my kids and say they shouldn’t be there.
Love makes the world go round, they say. You may say I am selfish, but I say love conquers all.
Follow Victoria on social media:
Spread the love, share this post: