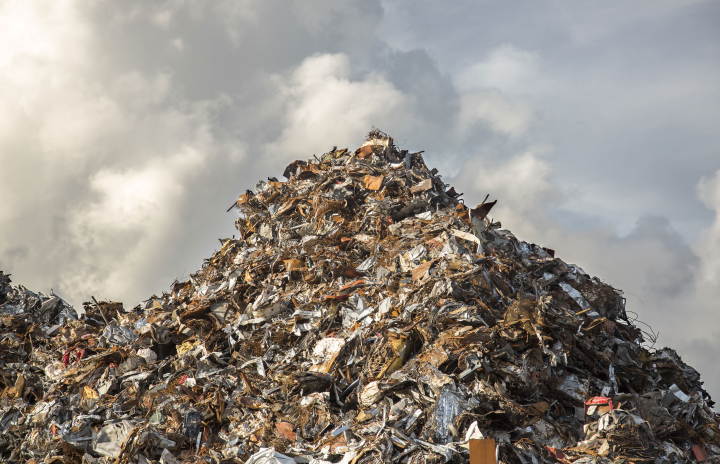 We labour under the midday sun, stumbling over the cracks in the parched earth. There is never enough water.

They say this was an ocean once – water as far as you can see in any direction. I can’t picture it. All we have here are the bleached skeletons of long dead beasts that roamed this place long ago. And the plastic. Everywhere the plastic.

It’s getting harder to find stuff of value now. “Our ancestors trash is our treasure”, according to the sign over the gates of Atlantis, but the treasures have long since been picked over. I’ve been working on this week’s offering – a bundle of old toothbrushes, worn into splinters, still retaining some of their colour. An old net, designed to catch the creatures that lived here back when the planet was blue and green, and water fell from the sky. An old pan that I’ve scrubbed with foil until it shines. I don’t think that will be enough to keep me from being sent above. It may be enough to get me a measure.

The woman scavenging the piles in front of me falls to her knees, sobbing silently. She has her back to me, but I see a man check her face for tears quickly before looking away and continuing his scavenging. I’m not surprised her cries are dry- it’s been so long since I last saw tears. None of us are hydrated enough for that. I watch her ribs shudder through her thin, black shawl for a moment before turning my face away. I couldn’t speak to her even if I wanted to. The sun is so high and so hot, opening my mouth would rob me of the little moisture my body had left. You can talk yourself to death out here.

Something stabs at my hand as I search. A razor blade maybe? Surgical pink plastic wrapped around a shard of rusted metal. it must have been protected from the elements, the handles are common enough but we rarely see the blades. I add it to my stash and keep searching.

When the sun is two fists from the horizon I head toward Atlantis and join the queue. We stand, dead eyed on the salt path, waiting to see if our offerings are enough to keep us off the farms and earn our keep. The woman in front holds her skeletal child on one hip, her bag of offerings hanging from her belt at the other. I can tell from from a glance it won’t be enough to keep her and her child in water, much less food. I’m unsurprised when I hear her begging with the overseer, pleading to stay down here as a scavenger.

“Please, we have no one. The farms already took her dad. She isn’t even 3 yet, how will she survive alone?”

“You should’ve thought about that before you had kids you can’t afford,” says the overseer, in a bored tone. “You go through there, to be processed to go up. She goes through there, back to the piles.”

The child is unceremoniously dumped out next to the queue by a guard, clutching at the half measure bottle of water her mother’s offerings had managed to buy her. She stands for a second, uncertain of what to do, then sits and starts to wail for her mother. I watch until someone in the line behind me breaks and leaps at her, licking the tears from her face. Stealing in sight of Atlantis is a capital crime, but bodily fluids are fair game. I look away as more people surge at the child.

My turn. I head into the entrance tent. It’s always cold in here. It was said that those who can afford to live in the city itself enjoy air cooled by machines. Somewhere beyond one of the three doors I can hear running water.

I give the overseer my name and identity number and lay my wares on the table. It isn’t much but it’s more than the woman in front of me had, so I’m hoping it’ll buy me some water at least.

He sucks in his breath as he consults his clipboard, a sort of reverse whistle.

“It says here you’re a good gatherer. Why haven’t you got as much as last week?”

“I was robbed 2 days ago” I say truthfully. “It won’t happen again.”

“You’ll need double next week if you want to stay down here,” he says. “I’ve made a note of the debt.”

I relax a little. He isn’t going to send me up.

“A half measure, a portion of cashews, a portion of sorghum, and a sweet potato. And that’s me being generous, because I always did like you.”

“Thank you sir.” I try not to despair. A half measure, in this heat? I sweated out more than that scrubbing the damn pan.

He opens the middle door, directly behind his counter, and I’m engulfed in frigid air. My skin prickles and bumps.

Beyond I get a glimpse of clear fresh water shooting into the air, surrounded by people. Clean, sweet smelling people with soft hair and smooth, unweathered skin. The fountain. Water just for the sake of it. I’d be angry if I had any energy.

Then he’s back with a small box. I grab the half bottle of brown water and gulp down a mouthful as I screw up the courage to ask.

“I wonder sir, if I might ask after my brother? He’s been up there for a while.”

“Information isn’t free, you know this. What will you pay?”

Of course. Nothing is free. I stare into the box as if I can suddenly make it contain more. Then I hand over the sweet potato and tell him my brother’s name and identity number.

The overseer checks his clipboard.

“Dead. Puked himself to death. Altitude sickness. It happens.”

I pick up my box.

I think back to our whispered row in the queue.
“We scavenged together, we should split the stuff equally!” I said.

“I can look after myself!”

“I know. That’s why I know you’ll be fine down here. Besides, I want to see what it’s like up there. Where we used to live. Where the ground isn’t poisoned by salt. They say there’s no junk up there. Just plants, for miles. Can you imagine that much green?”

“No one ever comes back, Jay. It’s dangerous to work up there.”

“I’m sure they look after the farmers, kiddo. They need us.”

“There’s always more of us though.”

There’s always more of us. People and plastic, two things the world will never run out of.

I take myself back up to my place – it isn’t much, just some earth walls and a tattered tarp, but it keeps unfriendly eyes off me. It’s higher ground up here, and the air is cooler but not too thin. I peep out through the tear in the plastic and look out over the piles, the lights and laughter of Atlantis in the distance.

I can see the recruiters from up here. There’s always a group, looking to build resistance to the Leader. The recruiters pick on people who’ve run out of luck and hope, get them to do the dirty work. Bloody hands at arms length. It never works out. Atlantis is strong, the leader is well protected, the people are well fed, hydrated. We don’t stand a chance, not even in numbers.

I count cashews, trying to work out if I can live on them alone this week. I could sell my sorghum to the ethanol producers, maybe get some new gloves. I’ll need them if I want to avoid getting an infection from the cut on my hand and still work.

I lay my head on my plastic bag pillow and try not to think about Jay. My last thought, before I drift off to a dream world made of water and huge great whale-fish beasts, is that I hope he saw the green.

One thought on “Blue and Green”