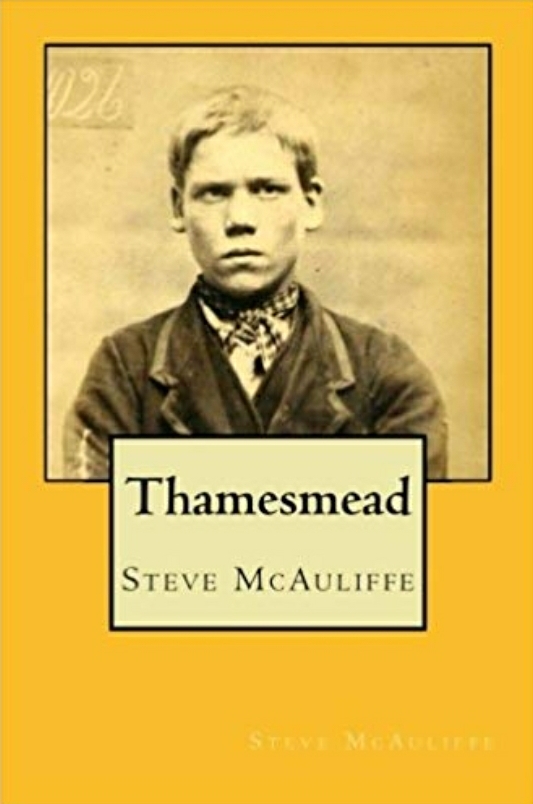 I’ll open this review of Steve McAuliffe’s debut poetry collection, Thamesmead, with a disclaimer: I do actually know Steve (online at least), we’ve worked together on a couple of independent lefty media sites, both being writers of a similar political persuasion. He did also give me a copy of this book free – but it was a birthday gift, rather than in exchange for review, and I didn’t tell him I intended to review it until after I had read it and decided it met my personal standard for public review. Long term followers of my goodreads, facebook, and twitter will know, I generally don’t like to give public reviews of books unless I can give them three or more stars.

Once I had read and fallen in love with Thamesmead, I badgered and nagged and irritated Steve until he agreed to answer some questions to make me go away – you can find his author interview below my review.

Thamesmead by Steve McAuliffe is a collection of 30 poems, some only a few lines, a sketch of an idea or snapshot in time, some several pages long, telling entire narratives. I really enjoyed the contrast in length and style throughout the book. It’s a slim volume, but I still found it took me a long time to read, because each piece made me want to pause and reflect, and at times re-read before moving on. The imagery is powerful, and even in the parts of the book that delved into the fantastical and mythological is vividly painted on the page so that the reader is right there with the subject, seeing the scene clearly through their eyes, a feat that’s difficult to achieve in poetry.

The collection is definitely coloured by Steve’s politics; part lament to what’s broken in our society, part a call to build a new system before it’s too late. But it’s deftly woven with a more spiritual level, the magic blended with the mundane, it holds up a mirror to our media, and our politics and by extension ourselves. That said, it isn’t inaccessible to people who don’t consider themselves overly “political” – it speaks of issues that impact on all of us, and feelings I think most of us can relate to, with quotes like;

I loved the contrasts in this collection, not just in terms of length but also in tone. It’s at times furious, the anger palpable on every syllable;

Then the City within the city took a bigger hit
Seems the bankers dry humped the market too long without mercy, and
Now everyone’s pissing their pants:
Is this the trickle-down effect in action?

Create Your Own System

And then the tone changes to one of hope, a chance at redemption for humanity;

You Are Not These Things

before veering back into uncomfortable waters again. The collection keeps the reader constantly slightly off balance, and I found that thought provoking and absorbing.

Poetry is supposed to, in my opinion, ask questions: of humanity or of society or of ourselves. This collection doesn’t just ask questions of the nature of humanity, it demands answers. Thamesmead asks why we are complicit in a system that harms us, and leaves the reader questioning why we can’t create our own system.

Ah fuck this!
-Enough.
Let the lions take down the donkeys.
And let us venerate the Lamb.

Create Your Own System

Thamesmead kept me on emotional edge -just as good art should I think – it challenged me and made me ask questions -of the human condition, of how our society is organised, and perhaps most effectively of myself and my place in the system we have collectively created as a society. That alone would’ve made this a four star book, but inclusion of lines like ;

Someone said dreams are collective folk-memories,
Re-interpreted in the unique language of the individual soul
But being half-awake and half-asleep,
I guess I could not know

Lectured On Morality By Sewer-Rats


Not down here, with the Grub Street hacks,
Grubbing about in the gutter,
Flat on our backs in our greasy rain-macs
Taking snaps up the skirts of the muse.

Lectured on Morality by Sewer-Rats

makes it a solid five star for me.

I have a few firm favourites, The Murmurs of Truth deserves an honourable mention, as does both The Freedom and Reverie of Words, and Awake, but I’ll share just one in full, because it encapsulates the hope that contrasts with the sorrow and anger throughout the book. Hope that together, we can do better. Collectively we can transcend our boundaries and do anything.

They tell us we’re little more than clockwork meat machines
And consciousness is just pre-packaged survival tool
But I disagree
I believe
With my night time aspect
(That is the part of me that dreams and surrenders gratefully to those dreams)
That we are in point of fact
Flightless Birds
And our wing-spans
One day will brush the
Very curvature of space.

TL;DR: Excellent debut poetry collection. Consistently punches up in a thought provoking way, with magic woven into the gritty and real.

Would recommend for: anyone who has ever pondered on why life is so sodding unfair.

Interview with the Author: Steve McAuliffe

Weirdly I think I have always been a writer – albeit a frustrated one for a very long time; but it was always sat there within me – this desire to write. I can’t honestly remember ever having to struggle to read or write; it just seemed natural. I’m sure that’s a common thing with all writers.

2. Where did the original idea for the title poem, Thamesmead, come from?

It was a state of mind/state of the nation-type thing. Thamesmead as a place terrified me as a teenager. My mate and his mum moved there and I visited him; we got chased by Skinheads; I hid in some bull-rushes; my mate just kept running. Something about the place, the sprawling brutalist architecture just seemed to dehumanise everyone. Plus it seemed symbolic of the birth of Thatcherism. However; I decided to revisit that memory and add magic to it. So in the poem, whilst lying amidst the bull-rushes I am suddenly dragged down into the underworld.
When magic meets the horribly banal – that’s what I like; and rewriting history to include the magical.

3. Tell me about the birth of Thamesmead, the book – what inspired you to write it? Did you always envision it as a poetry collection, or did it just unfold that way as you explored ideas?

I didn’t really envision a collection at all – at least not till I had 30 plus poems. I have written poetry sporadically since a teenager, but not really in earnest since I was in my mid-twenties. Then one day I just started writing – more out of anger than anything. It was Create Your Own System (that features in the book) – that kicked it all off again. I scribbled it all down in a kind of frenzy. Once I had these opening lines in my head it just seemed to write itself. “Is it just me or does the shit seem to flow one way? / Holy Thursday into Black Friday/ and who’ll clean out the gutters in your 2-3 million pound house in Peckham Rye?” That’s where it all (re)started

4. Do you have a favourite piece in the collection?

I guess I’m most proud of the poem ‘Thamesmead’; I think it’s the most ambitious in the collection and it works as a complete piece.
In particular I like the lines:
“It’s not so much the Rivers of Blood
But the Sewers of Hate
that gush like the forgotten Fleet
Beneath the satellite towns and sink estates”
I think it sums up the early 1980’s perfectly.

5. Who are your writing heroes and influences?

I’d have to say William Blake primarily.
Though song lyrics have always stuck and resonated with me.

6. How do you feel with the dreaded writer’s block?

Badly. I go into a flat-spin totally convinced that I’ll never write anything ever again. –I’m a bit of a drama-queen in that regard.

7. What piece of writing advice would you give your younger self?

I guess I would paraphrase a quote from William Blake “Create your own system; or forever be enslaved by another man’s” – basically screw what other people think; follow your own path – which I think I kind of did, it just meandered horribly for a long while; but there’s a reason for everything I think.

8. I know your poetry is now being made into music – I’ll link to it at the bottom of the page – how did that come about? Do you have more planned?

I collaborated with an old mate from South London; he now lives in Yorkshire – Andrew Monks. He’s a musician; he read my poetry and asked if I wanted to try and put some to music. We ended up releasing an album under the guise of The Mighty Ur; along with 2 other musicians: Sned and Darren. The album was selected by The Wire Magazine as one of their office-picks (basically what the music journalists listen to in the office) – which was flattering and surprising. –We have just released our 2nd album Light Mind Rising; which is angry and romantic and magical and caustic all in one. We’re proud of it.

9. One of my ultimate writing ambitions is to write an episode of Doctor Who – which I sort of fulfilled when I collaborated with you to make our own mini episode. Do you have any secret writing dreams or ambitions you’d like to fulfil? What’s on your writing bucket list?

At the moment I’ve just finished a play and am working on getting a troupe together to get it performed. It’s about 3 angels forced to sit out the apocalypse in a Lambeth pub.

10. So what’s next for you, writing wise? Do you have any further collections planned, or are you focusing more on music from now on?

I have no idea. I continue to write poetry, and have enough for a 2nd collection; but I want to find the right publisher for them. The music is ongoing and I love matching lyrics to music; plus the play I mentioned – I’ve had a real creative burst and I’m thankful for that; I’ll just see what comes along. –After all, it sounds corny but at the end of the day, it’s all really just a journey, isn’t it?

You can order your copy of Thamesmead by Steve McAuliffe here

Thamesmead by Steve McAuliffe is published by Purple Unicorn Media

One thought on “Thamesmead by Steve McAuliffe”

If you want to support Victoria’s writing, you can buy her a coffee here: