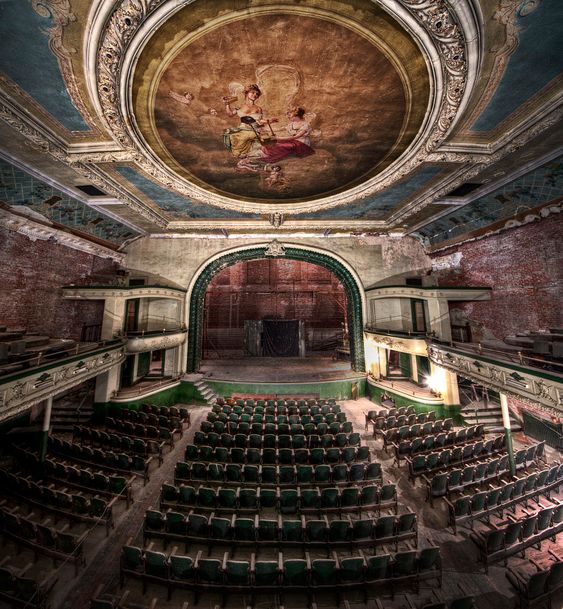 I realised halfway through writing this that this isn’t the first time I’ve used these particular monsters in a story and although I didn’t set out to I’ve almost written a continuation/sequel to the original here- hence this story being called The Show Must Go On (Encore).

The Show Must Go On (Encore)

Like most beasts, they are docile enough if you keep them well fed. It’s when they get hungry that they become aggressive, and then you really don’t want to be cornered by them.

They’ll swarm you, bury themselves deep into your soul, hollow you from the inside out until all that’s left is a husk, an empty, smiling, performing shell that exists only for applause, and one day you fade into…Well. One of them.

They infest every theatre, obviously, every opera house. You even get a sub-species in sports stadiums too, apparently. Anywhere that people gather to lose themselves for a while, and applaud and cheer as a group. And as long as the audience keeps coming regularly, as long as the show goes on, they arent a problem. They hang around in the gloomy spaces under the seats and in the folds of the curtains and the shadows of the wings.

There they can drink it all in; the heart and soul of the performer, the magical escapism of the audience, the small, intransient world that exists only for an hour or two, half real, half imagined. They soak up the power of the preparation and the planning, and gorge themselves on applause and encores.

But of course, after The Event and the awful years that followed, no one goes to the theatre anymore. No one goes out. There isn’t really anyone left to go out. We haven’t seen anyone else in weeks. And there is nowhere left to go. Since the Night Creatures made their presence known, lots of things have changed.

We didn’t know about the creatures that infest performance spaces when we broke in here. We just wanted somewhere warm and dry and big enough that we could build a little…well, not a life here, but a little existence. Somewhere safe to try and experience a few smiles before the inevitable happens. We thought the worst we had to worry about were the vampires and werewolves and incubi and such outside. We sealed ourselves in. We thought that was clever, at the time.

There were more of us back then.

This place had been abandoned even before The Event that changed everything. The beasts here were already hungry. Now they are ravenous.

We tried, we really tried. Just the seven of us, but we tried. A two person show, every week. Five person audience. They were placated at first. They settled down.

We acted out every movie, show, even comedy routine we could think of. It was fun, at first, a distraction from the outside. Comforting to remember things from before The Event. And the beasts settled, went back to their shadows.

But they can tell when your heart’s not in it. They can tell when the audience would rather get back to repairing the building or scavenging for food or blessing the salt or any one of a thousand more important things than watching two stony faced performers trying to remember the order of events in Mary Poppins. They can tell when the performers haven’t thrown their heart and soul into the show, when it isn’t everything they’ve lived and breathed for months, when they don’t care about the applause or crave an encore. When it isn’t a poor performance we fear most. Maybe it tastes different to them.

Just the two of us now.

I lock eyes with her, sitting rigidly in the centre of the front row, trying to will herself to concentrate on me as I sing Chitty Chitty Bang Bang and attempt an approximation of tap dancing.

They crowd around her, breathing on her neck, sniffing at her. She whimpers. We both know they’re going to swarm any second.

I spin around in a slow circle as I sing, getting a glance at the wings. They’re amassing there too.

I can’t remember the end of the song.

I try to do a theatrical finish, fling my arms to the sides and do jazz hands. Maybe if she leaps to her feet in rapturous applause, they’ll spare us.

She locks eyes with me, but she’s too scared to move. Frozen with fear. They are millimeters from her face, and their fangs are lengthening.

I close my eyes, and, selfishly, hope they take me first.

The beasts wings clash against each other as they swarm us and my final thought is that it sounds like applause.

This story was inspired by Miranda Kate’s Mid Week flash prompt number 179. Pop along to her blog and see what kind of story she and others have made with the exact same image or check out the hashtag on Twitter. This image was taken by Frank Grace, and he names it The Haunting New Bedford Orphuem.

If you enjoyed The Show Must Go On (Encore), check out the rest of my mid-week flash entries here.